Day 4 ended on a rocky note with some mild boulder hopping to get a glimpse of a limpid lake. Sleeping between mountains under the protective gaze of the milky way, I knew we were knocking on the inner doors of heaven which would soon open its arms to embrace us.

Day 5 was dedicated to boulder hopping. To me it was a mindfulness exercise where one step yonder was sometimes between life and death and at others between well being and a couple of broken bones. During those times, you truly realize the power of now, of being in the moment, of living in forgiveness and gratitude. Entertaining thoughts about the past and future at that point in time would be absolute harakiri !! After a quick stop on the side of a steep precipice with all of us jostling for space we started off of on a long walk along side some sort of a gorge with nothing much to admire except a few trees on far away bluish mountains and  mountain sides strewn with boulders and rocks of all sizes.

We kept walking and just when I was least expecting it we reached a point where the view opened into a valley where a snow clad peak majestically occupied center stage with 2 limpid lakes (Gangbal, Nundkol) at its feet. Almost everyone was stupefied, each soul experiencing their truth in their own way. I was knocked senseless for a while, taken in by the blinding splendor of the Mount Harmukh which closely resembled Mount Kailash. I could not take my eyes off what I saw, but my joy knew no bounds when we were told that we would camp by the lakes at the feet of the revered Mount Harmukh which is extremely revered in Kashmir Shaivism.

The muddy path downhill along the side of the mountain was narrow and often treacherous but it was quickly forgiven since it appeared to be the road to heaven!! From micro steps, I tried to take long steps but the feet were reluctant to surge ahead. The body never lies and I gave in to its wish of trailing the group and slowly reached the lush green meadows by the lake which was home for a day !! 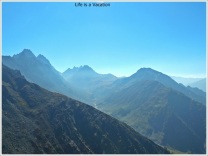 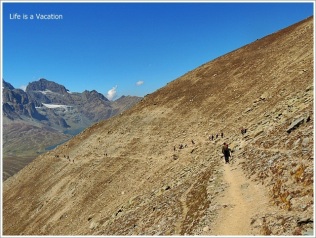 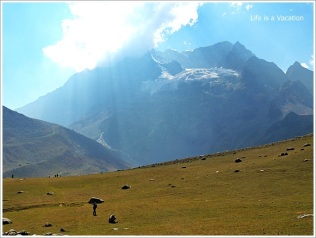